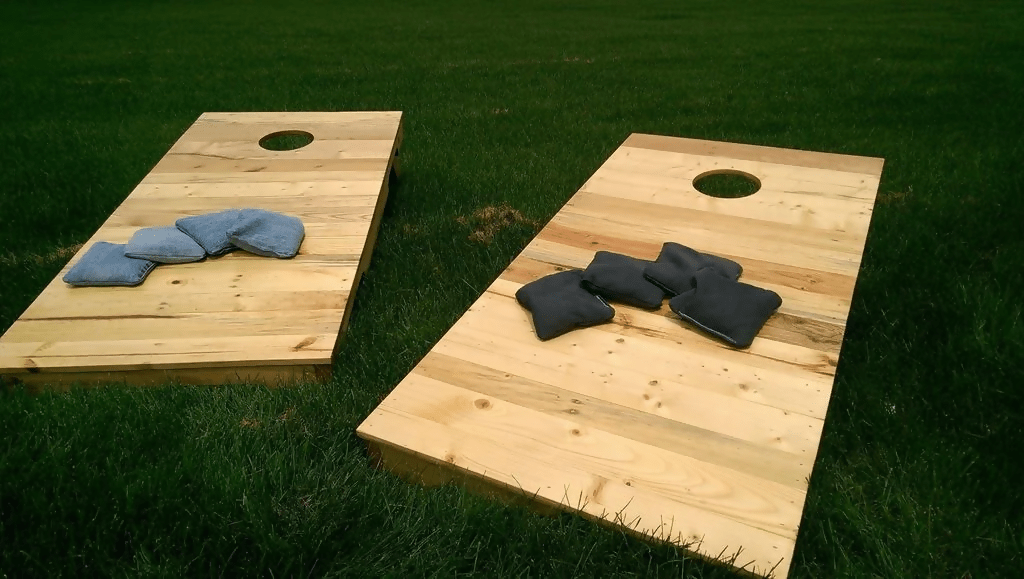 If you’re from the United States, there’s probably a great chance that you’ve played cornhole during an outdoor event or barbecue. This is especially true if you’re from the South. There are even official sports teams and competitions for it.

And if you don’t know what it is, it’s actually a very fun game that can turn competitive when the conditions are right. You basically have a board that has a hole in it and small bean bags.

The goal is to get the bean bags in one of the holes, which will score you three points. If you get the bean bag on the board itself, you still get one point. Whoever reaches 21 points first wins. It’s an enjoyable game to play with one other person and in teams.

If you want to add some extra fun to your next outdoor event, it’s worth considering adding cornhole to your agenda. It would be even more exciting if you make your own DIY cornhole boards to add a unique touch to the game. Read on to find out some interesting ideas that you can implement. 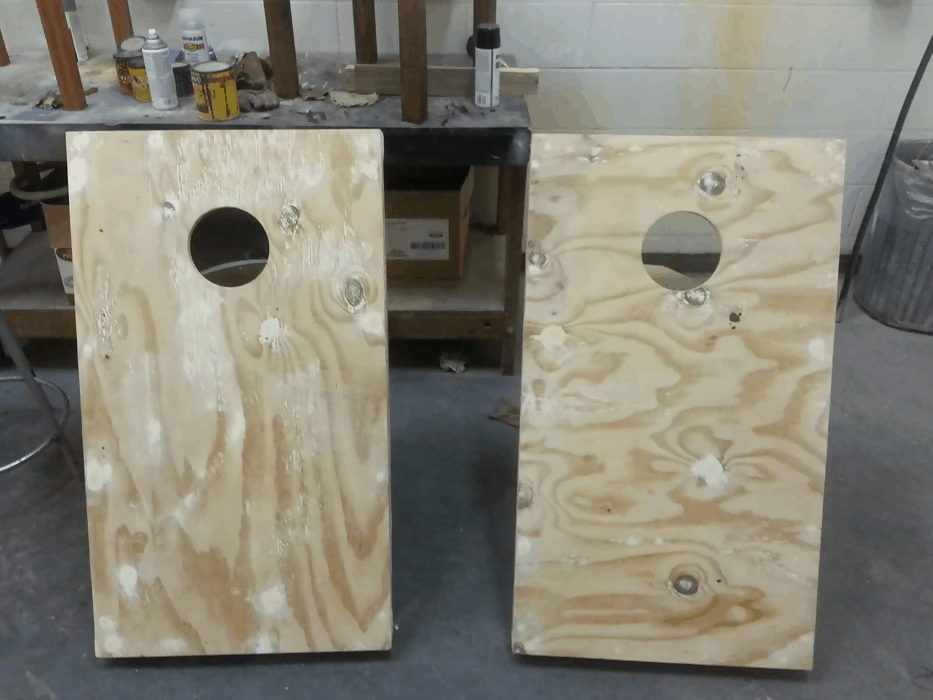 This is a simple option for those who might not want to get too fancy with their creation. All you’re going to need for this is plywood (you can choose between ½ inch and ¾ inch, although the person who wrote the original article said that they recommend ½ inches). Make sure that you cut the boards to the size you want both in terms of width and length. The next part you have to make is the frame and then the longer boards to support the frame.

After all the pieces have been cut to the size you want, you simply have to attach the boards to one another using screws. What’s left is for you to drill the hole that the bean bags are meant to go into; the person who made this used a fly cutter. The hole should be around six inches in size. Then make sure you sand the wood down to make it smooth and avoid potential splinters, and you’re done! This person did not do much to decorate it, but you can choose to do so if you’d like.

You will need to use three pallets for this option and it’s generally recommended that you try and find pallets that have as many slats as possible. 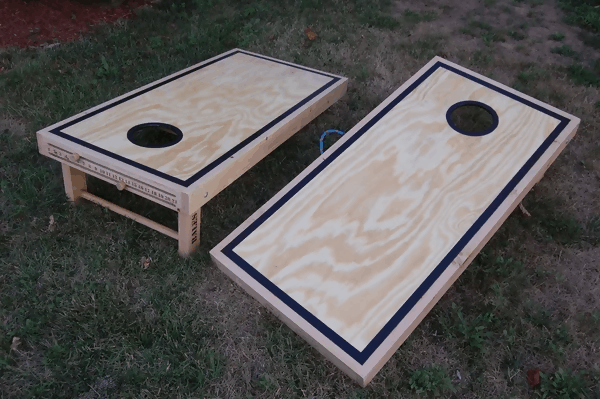 This one is similar to the rest of them in the sense that you will need to use 2×4 plywood. It’s a highly versatile wood, so you might want to keep it on hand for other DIY projects, too. There are some special features of this example that you might not be able to find in the other ones, for example, having pegs and posts that help to keep the boards together that make them easier to take places and to store. There’s also a scoreboard and a special place for the bean bags to go into if they fall into the hole. 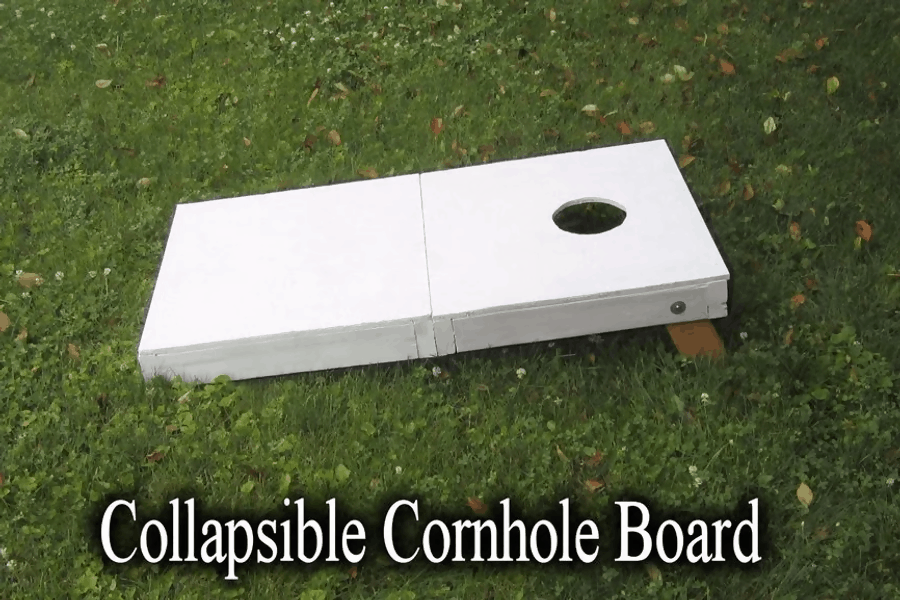 Here is a great option for people who want something that they could easily take with them to different places. Whether you and your family are going on a picnic, a trip, or some other place where you will be outside, having collapsible boards will make transport a lot easier. This could especially be the case if you have a smaller car where a typical cornhole board would not be able to fit, as was the case with the person who came up with this idea. 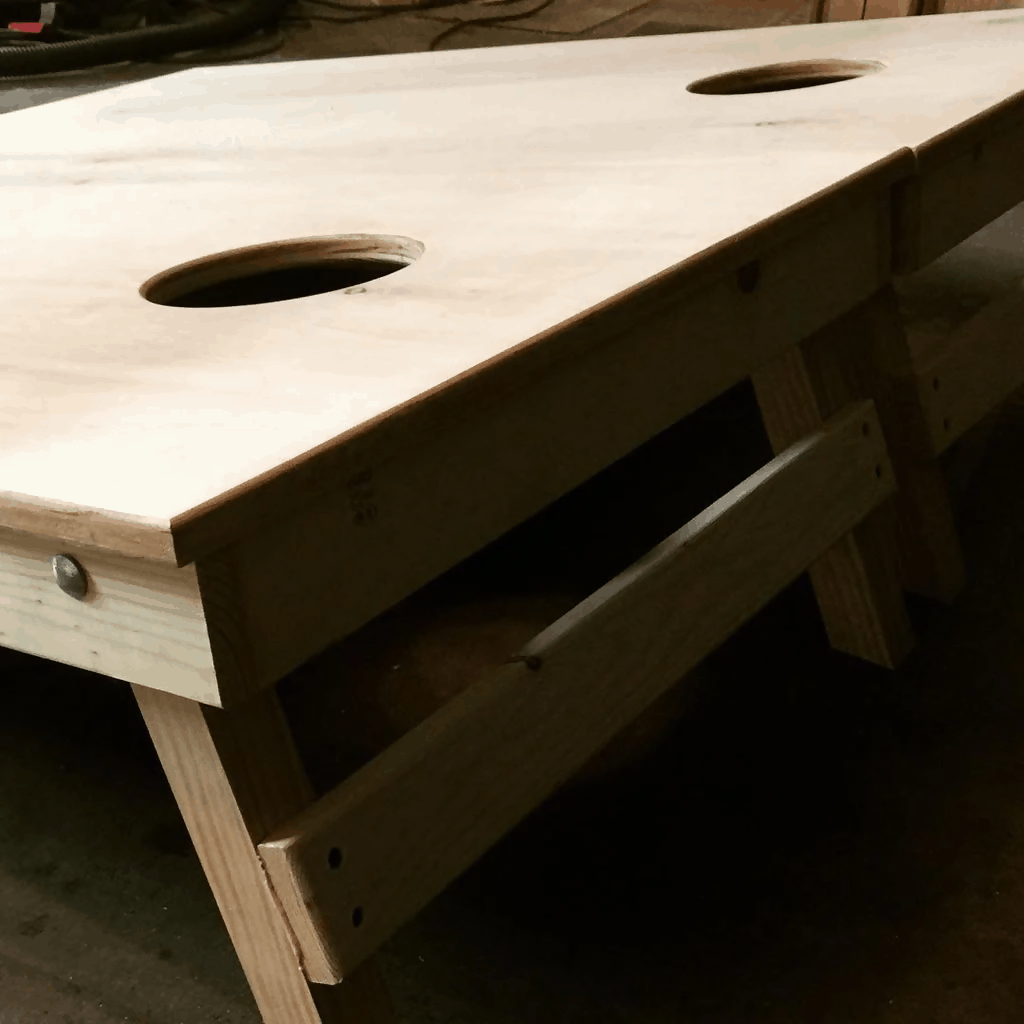 The person who came up with this blueprint was particular about making something that is sturdy and is guaranteed to last you a long time. A bonus is that all the materials they used weren’t too heavy, so you’re not going to have trouble taking your boards with you wherever you need to go. They used ¾ inch birch plywood, which is sturdy enough to make sure your bean bags won’t bounce as you play.

Another feature is that you can easily decorate them however you’d like- there’s no need to simply have regular wood! 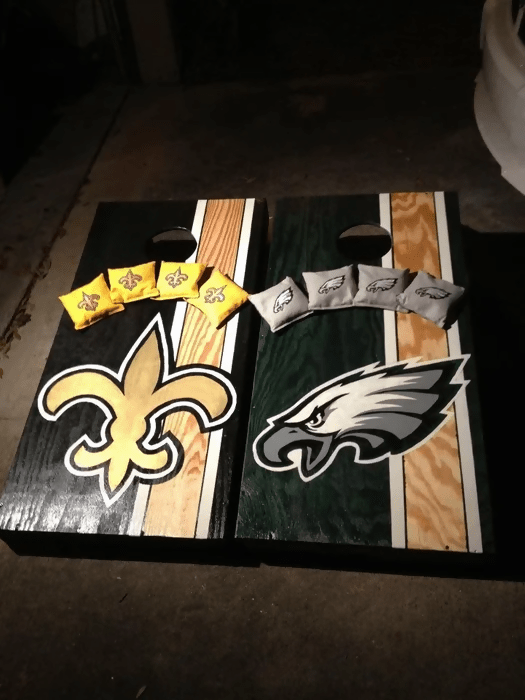 The person who made these boards only ended up spending $60 and they used recycled material from an old pool table that was in poor condition. And, as you can see from the picture, they customized their creation in a unique way.

This shows that, if you happen to have old materials lying around that you won’t have use for anymore, you can certainly repurpose them to make something that will put a smile on people’s faces. 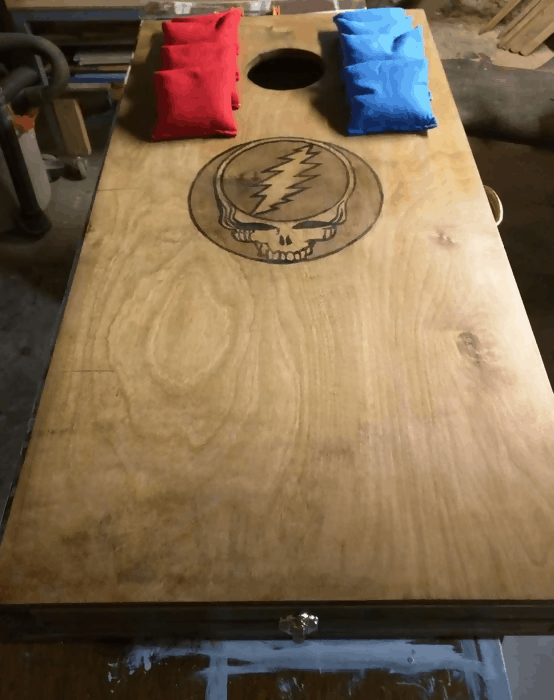 If you’re a fan of the band ‘Grateful Dead,’ this person created their design featuring the logo from the ‘Steal Your Face’ album due to the fact that the band was going on tour very soon. Of course, you don’t need to use the same design, but this article goes into detail about how you can include a logo of your choice to add some customization. All in all, they only spent around $70, which means that you don’t need to break the bank in order to have fun. 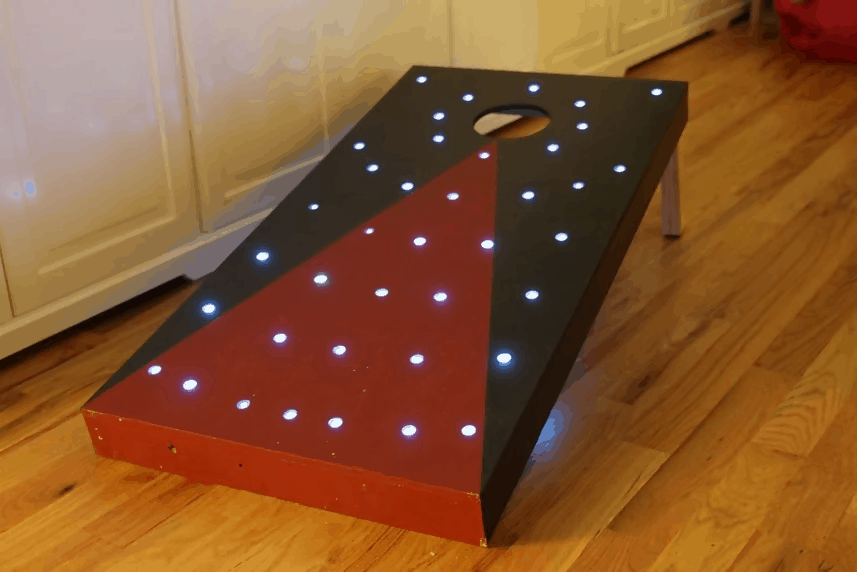 Here is a unique idea, especially if you want to play when it gets dark and when it will be more difficult to see. You will want to follow all of the instructions carefully to see how you can attach the lights and get them to work. If you’re someone who’s handy and loves to come up with innovative and cool methods of having fun, then this is most certainly the best option for you. 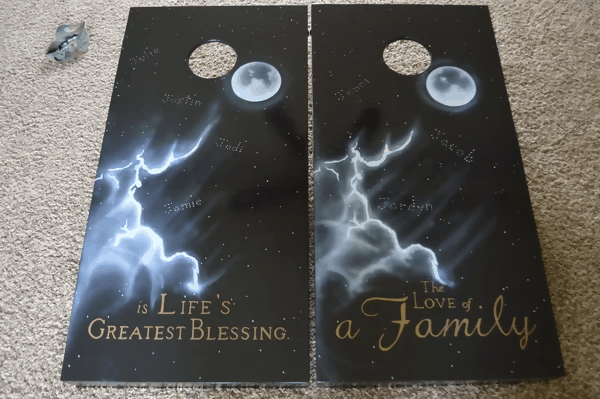 And if you’re not as handy, it’s fine because we also have included many choices that feature simple instructions. For this one, you’re simply going to follow the same steps as you would have in any of the other examples for the base. Then, you will be able to customize as you desire. This person suggested using a good primer and using a pencil so that you can have room for making mistakes before you actually go in and paint. 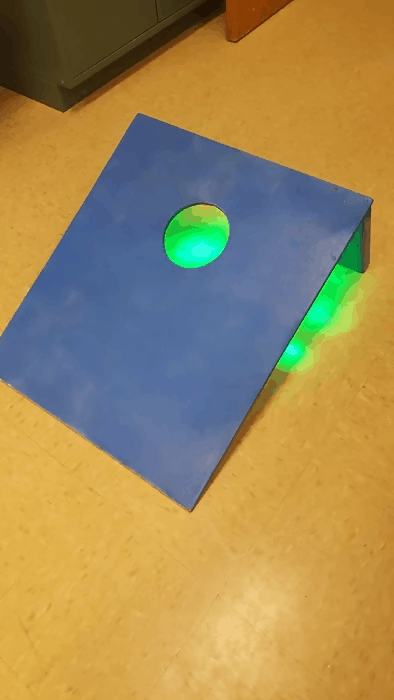 Here’s another light-up method, but for this one, the lights will be under the base instead of on top of it. Some of the materials and tools that you will need include plywood, LED lights, batteries, deck screws, copper tape, a soldering iron, a drill, an electric sander, RotoZip, and paint if you intend to add some designs and decorations to your final product. You will want to ensure that you follow the instructions closely to make sure that your results are exactly as they are meant to be. 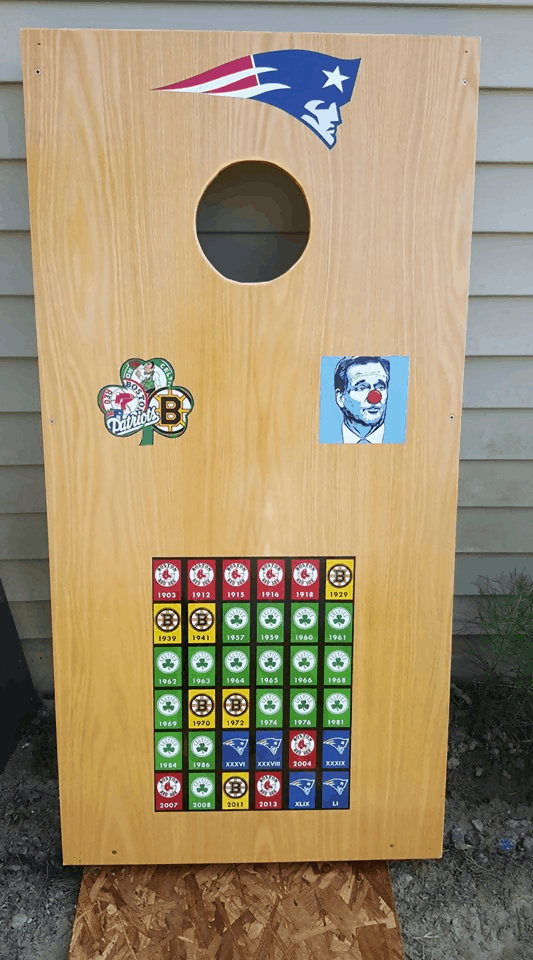 This was made by someone who is a fan of the Patriots football team, but you certainly don’t need to be a fan or to even like football in order to implement some of the main ideas onto your own creation. You can include stickers or banners of anything you’d like on your board to give it a special, customized finish. And don’t worry if you don’t have too much experience in woodworking- the person who made it was an amateur, too!

Here is even more proof that you can customize your final product however you’d like. Go ahead and download some sort of stencils from online and use a pencil to draw it before you go in with paint. It might require some patience on your end if you’re not particularly artistic, but it is a great way to give your cornhole board something other than the simple wood design.

13. ‘My Second Round of Destiny’ Theme

My Second Round of Destiny-themed Corn Hole Boards from DestinyTheGame

This person made theirs with the ‘My Second Round of Destiny’ theme, but you can create folding leg options yours using whatever theme you want to, whether it’s of your favorite sports team, television show, movie, book, or just a simple design pattern that caught your eye.

There are plenty of ways for you to focus on having fun with your family and friends. And thankfully, a lot of them are inexpensive and things that you can make yourself. As we talked about in this article, you can make interesting games for everyone to play right from the comfort of your own home without having to spend too much time or having experience in woodworking.

You also aren’t going to have to spend too much money, either, which shows that money doesn’t buy happiness indeed. This is the perfect way for you to add some unique entertainment at your next birthday party, barbecue, or other outdoor events.

Over on Reddit, one user submitted a picture of a local park that had installed a pair of permanent, cement cornholes. A user commented that she had never heard of the term cornhole before until they’re 80-year-old grandmother mentioned it several years before – they had always called it bean bag toss.

An Ohioan and said that they think the game comes from their state.

They say that they had been playing it since they were a little child in and always called it bean bags. However, they say that about a decade ago it began to gain a lot of popularity and the name cornhole seem to stick to it.

Other is expressed some discomfort with the term cornhole. One person who got a lot of upvotes said that according to him it has always been called bags, bean bags or bag toss. They say that using the term cornhole makes his skin crawl.

However, an enterprising Redditor with a knack for Googling figured out that historically it began in Cincinnati and was originally called corn hole. They say that the term bag toss could end up referring to a variety of different carnival games and that is why it is too generic to use in this instance.

A weird comment from another Redditor was that his own town had installed a similar style, but that the local Asian immigrants were using them as toilets.

Currently airing on ESPN while an MLS game is on ESPN+: Cornhole… from MLS

Over on the Major League Soccer subreddit, one person posted an image of a game of cornhole being played on ESPN. They were apparently commenting on the ridiculousness of airing such a niche sport when a major soccer game was live on the ESPN+ Channel. However, a lot of people chimed in with some statistical backup, saying that major league soccer games just don’t get enough viewership in America to warrant prime time placements. 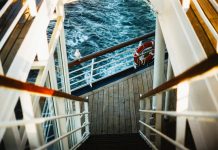 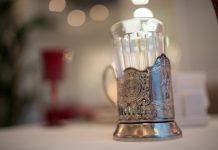 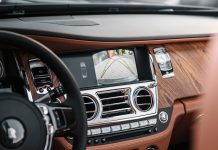